Happy Monday!  What an absolutely gorgeous day.  Well, from a week ago, Monday, yes, it is stunning.  A week ago some of my friends from Colorado were in town.  They were on a golfing venture.  I tried to warn them the heat would be unsettling and playing 36 holes of golf would be challenging.  One of them called and said--how do you live here?
I said, this is nothing.  This isn't even that bad.  It's only...109ish.  In July, it'll be 118+ish.  That's when it starts affecting me.
Regardless, for a few days last week, it was hot.  The signs of the beginning of a long, hot summer.  Then, Thursday it dropped to 90's.  Relief.  Beautiful weather again.  I love every single minute of it.  I rode my bike to commemorate the occasion.  Well, sort of.  That and the fact that Veronica was in the shop for a little bit of work.  I did enjoy cycling to and from work.  Really.  I love my bike.  It forces me to stop and think instead of rushing around if that makes sense.
The other night, my boss, Pat, insisted on driving me home since he felt it wasn't the best idea to cycle home at 2 a.m.  After some thought, I agreed to it.  It had been a long day and as much as I do thoroughly enjoy the new bike, I did not relish the thought of adding riding home and it taking anywhere from 30-45 minutes.  It was late and I was tired.
We are about a block from my house when he gets pulled over.  It was comical.  Here he was being a good samaritan and for that, he gets hassled by the police.  The cop that pulled us over seemed interested into why we were in Tempe.  Pat explained that he was giving me a ride home since my car was in the shop.  The cop said--where do you live?
I pointed at my house and hoped that he would let us go.  Nope.  He wanted to check into Pat's background.  After some talk on his walkie-talkie, he returned to ask Pat to step outside so he could show him why he pulled us over.  Basically, a ploy to say, have you been drinking?
Afterwards, Pat said, well, I won't be driving by campus or to Tempe anytime soon.
The weather inspires cycling and being outside, for sure.  With that in mind, I should conclude this and go outside.  Happy Monday~
Posted by harmony at 10:11 AM No comments: 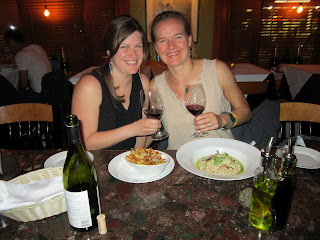 Dinner with Sara Jo at Solera....delightful.  We had mushroom risotto, truffle fries and calamari.  The only place that I eat calamari, too.  It is that good~
I do adore the calamari.  However, it is only the gateway drug of that place.  The cheese plate, risottos, mac and cheese are just a few of the offerings that I love.  We tried to take it easy and sampled a few of the appetizers only.  Wine was involved, too.  How could it not be?  Combine excellent food, conversation and wine is naturally part of the equation.
By far, one of my absolute favorite places in Denver.  At one point, a haven, even.  I think Sara and I dined there once a week while I was living on Birch St. in 2006.  I never tired of the calamari, wine or ambiance.
Yes, I always make a point to visit this restaurant when I am in Denver.  I also wanted to go with Sara as it is sort of our place.  I believe I have dined there with her the most and I wanted to experience another spectacular meal with her.  I knew she would enjoy it.
I will reflect more on my visit later.  I am off to work~

Posted by harmony at 3:01 PM No comments: 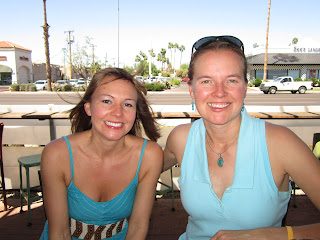 Finally.  I am able to upload photos to my blog again.  I have experienced some difficulty the last few weeks which has delayed posting.  I wanted to have visuals to illustrate the last few months of my life.  This will be brief as I have errands to run before heading into work.
I am excited to say that I am running a 8k race on Saturday night and am considering the San Diego half since I have friends running that race.  I never need an excuse to visit San Diego.  What a treasure of a city.
Regardless....this is me and my sister, Michaela.  She spent three days with me in Phoenix and it was lovely.  Of course, I had to take her on an eatery tour of my fave spots in Phoenix even if it was brief visit.  We started our foodie venture at St. Francis.  No drinking (i know...can you believe it? )  Still, we had been up til 4 the previous night drinking wine and catching up.
The food at St. Francis is delicious.  We shared a vegetable flatbread, french fries and the quinoa and romaine salad.  I loved every minute of it.  Talk about glorious day.  We even look happy. 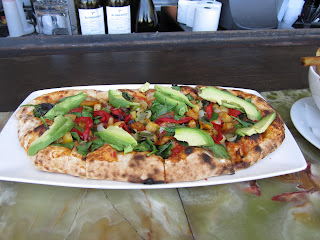 Doesn't this look delicious?  I loved the addition of the avocado.
After St. Francis, we did begin the wine adventure at a few local spots that are worthy.  I could talk about her trip, ad nauseum, and so I am going to conclude it instead.  Rarely, do I have the opporunity to show her around my surroundings.  I enjoy tour guiding my city and wish I had more people to show around.  I suppose I make traveling a priority because I want to and because I can.  Well, that is, until I received another dr. bill.  It's annoying.  It feels like I am being hit over the head with things that should have been taken care of a month ago.  The best part is that I went to the surgeon's office to settle my account.  I was given an amount and I asked if that was all.  Little did I know that there would be a succession of b.s. bills to take care of a few months out.  What I mean to say is, I just want to know, up front, what I am signing off on.  Not being told, yes, you are current only to find that that it is incorrect.  Isn't there a better way to bill these things?
And, to top it off, I was ten minutes late to the parking meter in Tempe the other night.  $42 ticket.  Seriously.  That is insane.  No warning.  Just a eff u for making the mistake of parking in that downtown area.  I will not make that mistake again.
I am glad that I can post, again, about my dining choices, wine, and friends's visits.  Celebrate, enjoy and always, Taste Life!
Posted by harmony at 12:50 PM No comments: