Delights from Hoi An

We agreed to head to Central Vietnam for four nights.  We knew that we would spend the anniversary in Hue or perhaps Hoi An. I had heard good things about both places.  It would be much easier to fly to Danang and then take a shuttle to Hoi An instead of flying into Hue.  Our homestay arranged a taxi for us from Danang to Hoi An.  Seemed perfect.  A quieter foodie city where we would be able to spend days before heading south or out of the country.
We pondered our options.  The main thing would be flying back to Bangkok to catch our flight back to the States.  The easiest cost effective option would be to fly from Ho Chi Minh.  Yet that seemed like a terrifying option especially after speaking with others who had been there.  Bigger than Hanoi.  More people.  More scooters.  Yikes!  Wouldn't there be a way from Laos or Cambodia?
After some serious consideration and thought, we decided to remain in Hoi An for five days and four nights before leaving the country.  I really wanted to check out Laos.  I kept hearing about how wonderful it was.  Not to mention, I do like the idea of acquiring more passport stamps.
So we landed in Hoi An. 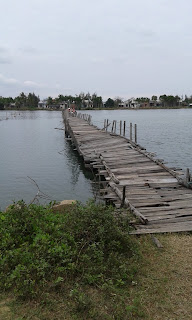 Bike tour on the 28th where we crossed this bridge.  Not quite as sketchy as it looked.  Preferable to ride as opposed to walk.  Believe me, much easier.  We started the 28th with a bike tour.  Seemed ideal in terms of celebrating Brian.  If only it had been a bike tour.  I think we biked 6 km.  Not much of a ride.  The majority of the tour was spent touring villages and learning their crafts.  In my mind, we would be cycling.
After the seven hour tour, we chose to get a massage.  There was a recommendation in the guidebook that looked nice.  Finding it easily, we headed to the parlor.  Of course it was full of people and unlikely that we would receive any bodywork for an hour if not more.  Before leaving, they managed to rearrange their schedule and find an opening for us.  We both were happy and liked this establishment.  Professional and established with great therapists.  Plus the ginger tea that followed the massage was delicious. 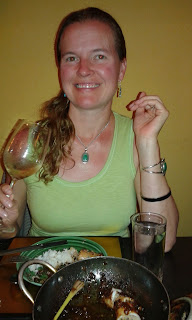 We made dinner reservations at Morning Glory Café.  Perfection.  Specifically for that occasion.  Celebrating Brian's life on the 10 year anniversary.  Great wine list and so many food options.  I was a little overwhelmed.  Choosing the bbq pork wraps to begin kicked off our meal.  The morning glory salad evaded us not once, but twice.  We returned a few nights later to enjoy this dish and again informed that this meal was unavailable.  Popular dish.
I had read about the pork stuffed squid and smoked eggplant.  I knew we would be trying both of those dishes.  In addition, we tried the bitter melon as a side dish.  The squid was good, not great.  The eggplant was amazing.  I fell in love with this dish as did Shari.  And the bitter melon offered the right amount of greens.  The dessert options were not exciting or sexy.  Meaning, they did not offer chocolate.  A little sad but we got over it.
Hoi An was my favorite city that we visited while in Southeast Asia.  Great food, vibe and easy to get around.  We could have went to Danang, Hue or Paradise Cave.  For whatever reason, staying in Hoi An captivated our attention.  The next night we restaurant hopped for dinner.  While sitting at a restaurant enjoying wine (obviously) we befriended our waiter.  We asked him where we could find a good banh mi sandwich.  Minutes later he returns with part of his banh mi for us to sample.  This started our friendship.
He offered to take us on a custom tour the following day.  Either back to Danang or My Son.  We agreed to My Son. We had flown into Danang and so returning there seemed silly.
Our only requirement was that we would not be forced to shop or buy items from locals. I told Bao that I wanted a banh mi sandwich and coffee to start the day.  He told us that that would not be an issue. He arrived with his wife and two scooters that would be our transportation for the day.  The banh mi was delicious.  We were escorted to My Son making brief stops along the way.  My Son was great and our first venture into seeing temples.  We managed to avoid this for a solid week.  Afterwards we stopped for lunch at a truly local spot.  We were the only westerners in the joint.  Bao ordered for us.  The first course was not exactly what I envisioned.  Veal skin with greens.  I tried to fill up on greens to not be rude.  Next we had shrimp, cilantro and noodles.  Finally, we tried a seafood stew.  Too much food but lovely.  Of course there was a language barrier to contend with.  Bao speaks good English and he understood us without us telling him too much about ourselves.  We wanted good food, local spots and a soulful experience.  He provided all of them.
He recognized Shari's sadness and wanted her to be happy.  He saw that she was a genuine person and had heart.  He went out of his way to ensure a great tour for us.  We stopped at a cemetery and it was perfect.  I know it sounds morbid, I do.  Yet, it was perfect.  His grandmother had died a year ago and his family would be adding the photo to the headstone that day, a year after she had passed.  In reality, we were a day early.  Her grave had an offering plate, flowers and Bao brought more incense.
We had another stop to purchase a notebook.  Shari had forgotten her journal and there were so many things that we were experiencing.  Writing them down, daily, helped.  We looked in Hanoi and Hoi An and were unable to find any sort of note pad.  Bao fixed that for us immediately.  Seemed so simple.
It's funny how people that you need enter your life exactly when you need them.  I don't know how Bao knew how to find us or offer to be our tour guide. 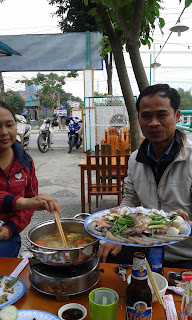 It was a wonderful way to celebrate Brian's life.  Ten years has passed since he died. I remember him every day and miss him.