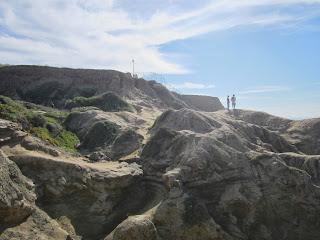 The next morning, after making a few necessary stops--food and coffee--we headed to Point Loma to walk around some of the trails.  We began the day in Ocean Beach and munched on breakfast burritos.  I think I had mentioned how wonderful that would be in the a.m. if Tom knew of a place to recommend.  He took me to a spot and we people watched in Ocean Beach.  If I lived in San Diego, that is where I would want to live--I think.  Funky vibe, great shops and inviting.  Next time, I think I will suggest checking out the spot on the pier that offers breakfast burritos.  I want to dine on the water and people watch. 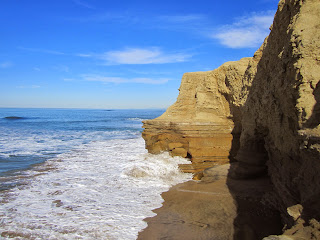 Beautiful day.  I loved being near the ocean.  Our hike was minimal and easy going to say the least.  We saw several surfers, couples and dog walkers.  I was surprised at the amount of tourists in the area.  We almost saw a dog fight between a doberman and a labrador.  The doberman's owners were unwilling to alter their course which surprised me.  Obviously, their dog was not enjoying the attention of the labrador and it could have led to a big skirmish. 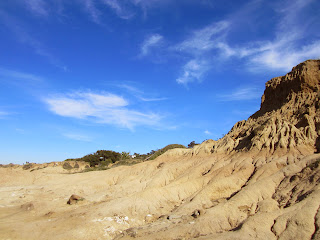 After the hike, we drove to some tourist areas since I wanted some post cards and the necessary magnet.  In 2005, I started this habit of buying garish magnets to represent the places that I have visited.  Originally, Tom took me to an area near downtown.  We pulled into a parking lot and immediately recognized that that had been a mistake.  We were inundated with people and it was claustrophobic.  Thankfully, he offered to detour to old town.  I found a magnet in the mission district and from here, we checked out more hiking spots.  San Diego, for me, is about the ocean and enjoying the weather and of course, the food factor.  I see a return trip in the near future to check out more fish tacos, Temecula and other foodie friendly places.  I have little desire to shop which I think surprised Tom.  No, I am more about the outdoor factor and food.  Two days was not enough by any means.  The drive was not too bad either.  I believe I will return and soon.  I understand the appeal of that city.
Day two continued with Tom heading to work and me wandering around Pacific Beach.  Tom's roommate offered to take me a bbq but I felt inspired to walk around his area of town.  I stumbled into a Trader Joe's hoping to find something to eat on the way back to Phoenix.  This woman stops me and says--omg, how are you?  I saw your jacket and recognized the logo, look up, and realize I know you.  How are you, Harmony?  It's Brenna....not going to lie, it took me a minute to place her.  It had been awhile.  She explained that she had been living in Pacific Beach, returned to Denver (briefly) before coming back to San Diego to work for Trader Joe's.  She said she loved it there and we chatted for a few additional minutes.  I told her that I was now in Phoenix and visiting a friend for christmas.  Small world, indeed.
Eventually, I found a spot that seemed appealing.  I had a glass of wine and reflected on my trip.  I always do this and I make lists of what I want to do in the near future.  I like crossing things off my lists.
Anyways, Tom called me and we had mexican take-out for dinner.  I swear, i could live on mexican food.  We shared burritos and pastor tacos.  I was disappointed in the taco but the burrito was excellent.
Day two concluded with watching Seinfeld and me considering when I should take off for Phoenix.  I wasn't too excited about that drive....
Posted by harmony at 11:25 AM