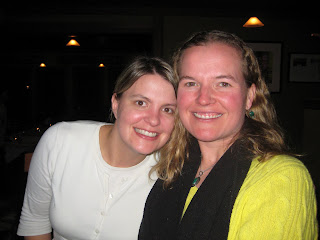 Happy Birthday, Jenny!
When I was ten years old, my bestie, Kristy VanEmburgh, lived one house from me. Our neighborhood was full of kids that matched Michaela's age, my age and Jade's. Jasmin was definitely the odd man out.
Anyways, Kristy was my friend and her parents bought a house on the north side of town. I was bummed, but I was ten. What could I do?
While their house was on the market, I was making chocolate pudding with Kristy and her older brother, Kevin. In walks a realtor with a couple and their daughter. I remember meeting them since I remember feeling awkward in the kitchen while a showing was going on. Distinctly, I remembered meeting Jenny that afternoon.
Three months later, the family moved into the vacant house. I ran down, curious, as to who the new neighbors would be. It was Jenny, her brother, Mike, and older sister Valerie. Fast friends we became overnight. I think I spent the entire three months of summer break at their house. My mom kept insisting that I would overstay my welcome; but, Jenny kept inviting me back.
We attended the same middle school and high school, but we had changed. Mostly due to distance. My parents divorced and we moved to the north side of town. Fortunately, for me, I was able to continue with my elementary school mates in spite of the boundary dictating my transfer to Central. The last thing, I wanted, at that time, was to start over in a new school.
After high school, I attended KU and Jenny went to Ft. Hays. Years later, we both ended up in Denver. We reconnected, moderately, and since the initial lunch date, we have become true adult friends. I see her, once every two months for happy hour. We make plans and stick to them. I am hoping to do a Mudd Volleyball benefit with her and her husband in August and perhaps a relay, later in the year, with some of my friends. I am thankful for the chocolate pudding. I suppose it will always hold us together.
Happy Birthday..
Posted by harmony at 1:21 PM