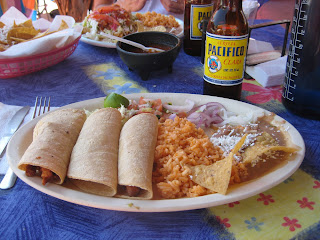 Shrimp tacos. Another favorite.
Inspired by my summer in Guadalajara.
School has some odd demands or so I tried to convince myself while avoiding the language requirement.
In high school, I took latin. Foolish. I felt it would aid me once I attended law school. About three weeks into college, I knew that law school would not be in my future. It was not a fit for me. I think it truly disappointed both of my parents; but, I was happy.
Back to the food factor, eventually, I completed a year of spanish. Going five times a week at 8:30 in the morning was not appealing. If there was a way to finish said requirement in a few months, wouldn't that be preferable?
My friend, Jean, and I signed up for study abroad and headed to Guadalajara, Mexico, for two months. We stayed with a host family that provided meals every day but Friday night-Sunday lunch. For those meals, we were on our own which did not bother us since we wanted to travel around Mexico anyways. For weekend we stayed in Guadalajara since they thought we all had mono. It was a false alarm which forced us to stay quarantined in our host families' houses. Yuck! I think she made us hot dogs that Sunday night.
Anyways, there was a fish taco stand on the way to the bus that we took to get us to school. We would walk by the bus, daily, and wonder about the fish tacos. Never curious enough to try one until the week before we returned to the States.
Fish tacos are delightful. I loved them and still do.
I visited a friend of mine who is living off grid. Full on, RV lifestyle. I support him and his decision to pursue this type of life. It wouldn't work for me, but not everything can fit for everyone.
I spent a few days in Yuma, AZ, and we crossed the border into Mexico.
I parked my car with fear that it would be gone when we returned to it. I had my bike attached and so yes, I felt that it was out of place, somewhat.
We walked around and were approached by multiple people inquiring if we wanted dental work. Apparently, this is a huge thing in Mexico. We declined and found a restaurant. Aron had been there before and felt confident that I would also enjoy the fare.
I did. It was great. Who isn't happy with chips/salsa and beer? The restuarant was full of tourists (mostly) and we listened to the band sing random mexican and american songs.
Aron wanted his shoes shined and from previous visits knew that they charged one dollar. He had two pairs shined while I continued to enjoy the ambiance.
I did fully enjoy the meal/experience. We walked back towards my car with me secretly praying that it would be there, unscathed. It was.
I drove to the line to cross the border. I think we could have walked faster. An hour and 45 minutes later and we were in the States.
The shrimp tacos was worth it. I hope you can appreciate the photo, too...
Posted by harmony at 3:15 PM