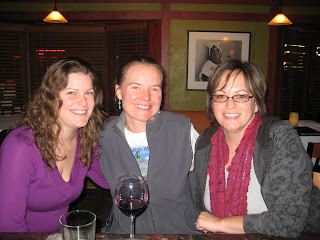 After numerous days filled with rich food and red wine, I knew that we should take a break from excess. Still, Shari had not been to Solera in a few years.
We checked out of the most fabulous place in the world--Bellagio--and took a cab to McCarran Airport. Arriving early, since I was not a fan of the going through security at the Las Vegas Airport. Most people returning home have a stench of defeat about them. I suppose that losing money would do that to you.
The airport has slot machines. I find it funny that people still try to win something back.
For me, the airport provides Starbuck's, a store to purchase a magnet (always buy one to commemorate my trips), water, read magazines and sometimes, purchase a book. I have been trying to utilize the Denver Library instead of buying a throw away paperback.
I bought a gold magnet that displays the Strip. It is not accurate, but it illustrates most of the places that I ran by. Yes, it was perfect.
We settled into the gate area and waited. I ran into other runners based on their shirts, medals that they were wearing, or limping across the terminal. I ran into the guy that flew out to Vegas on my flight. I saw him in front of the Flamingo on Monday and we discussed our times. He killed it--03:40:00! Talk about a great first attempt.
I told him that I was happy with my time and had utilized the Bellagio Spa which aided me in the recovery phase. He said that he should have got a massage.
On Tuesday, while sitting in the airport, I watched him grimace and walk. He was in a lot of agony and I was thankful that it wasn't me. I was sore, but not, at all, like him.
Eventually, Frontier notified us that they had experienced a computer glitch which affected all of their flights. Our flight had been delayed by an hour.
I read more of my book and waited. I know that it could have been worse, but I did not relish the idea of more time sitting in the airport.
Finally, we boarded the plane and were rewarded with free tv access. I noticed a program on James Franco, Glee, and ESPN was showing the KU/Memphis game. I alternated between basketball/James Franco. The wait was worth it.
Sara Jo picked us up and I drove to Solera. It is like home to me. Exceptional food, wine and staff. I am friends with many of the people that work there and I respect Goose. He is a good man.
We treated ourselves to calamari, mac and cheese, and a cheese tray. We recapped the marathon and b.s.'d with Sara. Yet, another amazing day full of food, wine and friendship. I know that I am blessed....
Posted by harmony at 7:12 AM