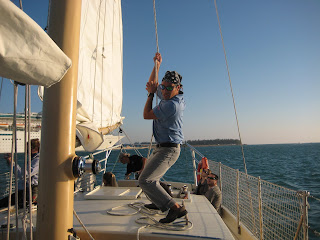 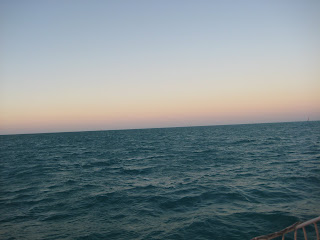 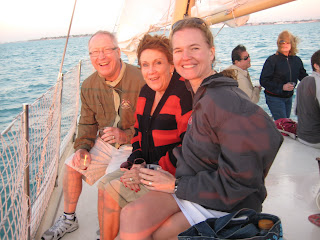 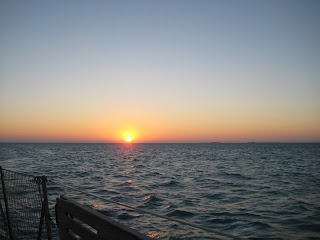 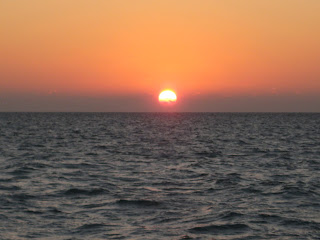 I hustled to the shuttle. I made sure that I would be able to change and get on the next departing shuttle scheduled to leave in 15-20 minutes.
The wind and wine sail was scheduled to leave the dock at 4:30. Since I was unsure of where I was supposed to be, I left on the 3 pm shuttle to make sure I had ample time to be lost if that happened.
I brought a book, grabbed a coffee and headed to the boat district. I found the check in point, immediately, but no one was manning the station. There were three to four other tourists milling around and so I sat on the ledge, opened my book and kept to myself. Eventually, this older couple and I started up a conversation. We were alone, still, and uncertain about whether or not the sail was going to happen since no crew had surfaced yet.
About 4:15ish, a guy shows up to check people in. We make our way down to the sail boat and I sit by Connie and David--the couple that I had been sitting by on the dock.
All, in all, I think the sail boat had twenty people and three crew members. The Captain, Brian, seemed friendly enough and then there was Kelly, the sommelier who didn't really know what wine she was serving, and Christian.
Kelly explained that they offered eight different wines and suggested if we didn't like one--just pour it off the side of the boat. Why suffer through a bad wine?
We began with champagne and then I moved on to red wine. They had a cabernet, a merlot, a red blend and a pinot. I had little interest in any of the whites and by this point, I had befriended Christian who took an interest in keeping me with wine. He was Argentinian and I mentioned that I was bummed that they didn't have a carmenere or malbec at least?
The next time he came around, he had found a bottle of Chilean Cabernet and opened it for me. I loved the wine sail. Absolutely loved the wine sail. The sunset was gorgeous and afterwards, I had dinner with Connie and David at Mangia Mangia. A win-win since I enjoyed our conversation and the food was lovely, too.
Posted by harmony at 7:21 AM